....Or the insane things we do to keep from going insane, if that makes sense. I was at a loose end the other day (I have to believe that most people who knit or crochet etc. are forever at loose ends) when I decided to do a little crochet.

I made the decision after ripping back about six inches of circular knitting in sock yarn on a 3.0mm needle - there were 400 stitches on the needle. Why? Well, you guessed it, I had a twist in the cast-on. I won't go into why I hadn't noticed it earlier. Let's just say it was therapy knitting. The therapy worked, but the garment was never going to be a mobius, so out it came.


This is when I became my mother, who crocheted more than she knit. Her argument was - in crochet you only have to look after one stitch at a time - certainly easier than 400! (How my mother ever looked after five children is beyond me - but then a little insanity runs in the family :).

I had some yarn hanging around - go figure - so I thought, why not a vest. I had actually just finished a crocheted mobius - more on that later and I had been longing to do some "granny squares". I know some people long for Paris or something exotic, I long for crocheted motifs - a little insane, maybe.

I started by flipping through some crochet books I had, looking for the perfect motif. It didn't exist, in the books I had anyway. Perfection in this world is hard to come by, so I had to make up my own. I am far from perfect, but I am a little obsessive-compulsive (more insanity), so I had to have exactly the shape I had envisioned. At this rate, of course, the vest might never get done.


The long and the short of it is - more short than long, it is a vest after all - I came up with the above motif, which I am sure exists in the book 100 Granny Squares or something like that, but, in the absence of a source, I had to improvise!

With some inventive joining of hexagons - I love the allusion to witchcraft with the "hex", as in "who put the hex in hexagon - I am almost finished. I was originally going to do a lot of beading on the motifs, but since I didn't feel like pre-beading the yarn and I found stopping to pop on a bead slowed me down too much - crochet is fast - I opted for adding a bead on the little tail of yarn at the centre of the motif - Voila.


Now who said granny squares are dated. I think they're awesome!! My magic wand was a 2.75mm Amour - love that word - crochet hook from Clover. Try them - they really work wonders!!

Have a magical day!!
Posted by Carol Tomany at 7:04 AM No comments:

Now, where did I put that wand? Or in this case that little blue box. Voila! You now have -
1. 3 needles - two to lose and 1 to keep!
2. 1 needle threader - you may need it beside a dimly lit lantern.
3. 1 pair of the world's cutest scissors - that's cute not cut - although they are sharp. 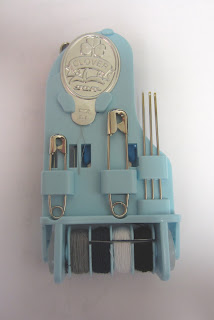 4. 1 pair of tweezers - to pick out the itty bitty threads that you can't manage, cleanly, because you've just built a campfire.
5. 4 neutral shades of yarn - who wears fuschia camping?
6. 2 safety pins - 1 big, 1 small - I swear there were times in my life, when I was held together entirely by safety pins!!! 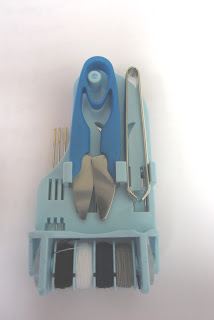 All with their own special place in the tidiest little plastic container you've ever seen. In fact, it's no bigger than a cigarette lighter. 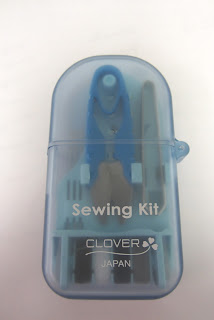 It's from Clover - Compact Sewing Kit - #CL2002 on the Infiknit site. Order your miracle worker today - go camping tomorrow - or something like that.