I can't believe that it's been almost a year since I last posted. Well it has been a year of transition. We've discontinued some products, added new ones and basically moved more in the direction of fibre and felting. Yes, I still knit a whole lot and I love, love, love all my needles and Clover accessories. However, there was something about felting that called. 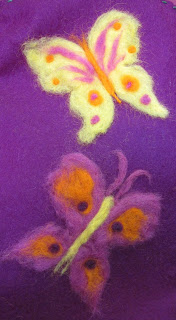 In fact, when Dewitte Engel returned my call, I knew that I was going to have the Crayola equivalent of a colouring marathon. With 46 colours of Bhedawool fibre and 75 shades of 100% felted fabric - TrueFelt, I was a kid again with a new box of crayons and some blank paper - time to create.

It took a while to decide exactly what to felt and since I had never pushed a needle into fibre and fabric before, I was a bit hesitant. I thought of some small projects - cell phone case, tea cozy, diary cover, etc. These are great for gifts and for starters, but I needed something "grand." 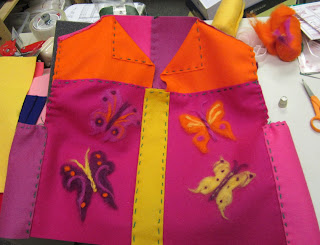 I started Monday August 10, with the idea that I was going to create a vest and embellish it. The felt rectangles were easy to shape into a "Jackie O" or "Coco" style boxy vest. I had hoped to avoid sewing by simply felting the shapes together, maybe another time. I really needed my first efforts to adhere, so I used a running stitch and some lace weight yarn to create a saddle stitch accent - voila!! 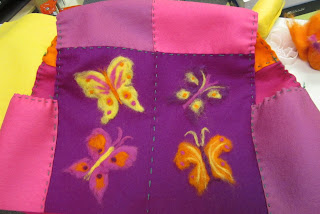 I drew in the gapping arm hole with some more saddle stitching pulled a little tighter and then I began to design with a felting needle and the smallest amount of Bhedawool fibre. You may never actually see these butterflies in the garden, but I saw them in my mind. That's one of the pleasures of Art. You can make the real, surreal and live in a world of fantasy.

I'm about half done. I'll keep you posted.
Posted by Carol Tomany at 9:46 AM 1 comment: